Why are particle filters needed?

The problem is a sharp Intensification of the health risks in all urban agglomerations, due to rapid increase in motorized traffic during the past 50 years. Fine particles in the alveoli intruding range are “Toxic substance Number 1”. These ultrafine  solid  particles  in  the  size  range  <  500  nm  are  exclusively anthropogenic, resulting  from  technical  combustion,  I.e. from stationary  combustion  e.g. building heating,  but above  all  from  the combustion  engines.  All engines  produce these  fine particles,  both  as  soot  and  also  ultrafine  metal  oxides  from  abrasion  and  lube  oil additives.  However, the heterogeneous combustion processes in Diesel engines deliver the highest concentrations. Despite intense engineering efforts. the emissions of  the  number  of nanoparticles  from  new  IC-engines  are  not  diminished.  Indeed, deterioration  is  observed,  due  to  emission  of smaller  particles  than  from  the  older models. The famous 6-Cities US Study (Dockery 1993) first showed the strong  impact of the ultrafine  particle  content  on  the  residents’  mortality,  Including  the  carcinogenic  and cardiovascular  consequences. The WHO has quantified the total effect for several countries. The statistics for Switzerland reveal the magnitude of this risk, which is now at least 6-fold higher than the risk of traffic accidents. This is representative for all other industrialized countries.

The two lower Figures illustrate that mainly the very fine particles Intrude Into the lung and from the lung are transported to other body organs.  This penetration contrasts with the response to particles > 1 µ.  Those larger particles are efficiently Intercepted and  expelled,  thanks  to  the  respiratory  cleansing  mechanism,  which  has  naturally evolved. Clearly the  particle  size  Is  a  major  factor  and,  of  course,  the  particle solubility.  Hence, the modem approach focuses on the solid particles in the alveoli-intruding size range. The WHO classifies these particle emissions, since  1988 as  carcinogenic.  This fact has prompted environmental legislation, in many countries, stipulating the minimizing of such emissions using the best available technology. Because there is no  safe threshold for carcinogenic substances. That requirement  defines  the  engineering  task:  determine  which exhaust-gas  after-treatment  Is  the  “best  available  technology”  and  decide  how  widely it  should  be employed to curtail the combustion  engine emissions. This task comprises both new engines and also the presently deployed engines. The extension to existing engines, I.e. retrofitting, bounds the technology choice and is very demanding on the application technique.

Historically, legislation is confined to rules for new vehicles.  The emission legislation ameliorates the recognized health risks through progressively more stringent emission limits.  This  tightening  exhaust-gas  legislation  is  a  big  challenge  to  the  engine manufacturers  that  has  required  expensive  engineering.  Figure  3  Illustrates  the advancement  of  exhaust-gas  legislation  for  utility  road  vehicles  and  for  off-road vehicles (construction machines, tractors, etc.) in Europe. 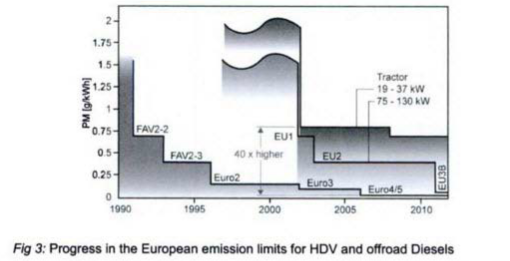 These particle limiting values are defined as the total particle mass (PM, g/l<kWh). This metric  Is  inadequate  for  EUR04/EUR05  because  their  PM  is  approaching  the detection  limits.  The  question  also  arises,  whether  the  PM  metric  represents  the significance of particle size described  above. Ultrafine  particles in the  100  nm range have  a  very  small  mass,  approx.   g/ particle.  In the mix  of larger  and  smaller particles. The  modem  engines  indeed  attain  the  legislated  limits  but continue  to  emit  high concentrations   of  extremely   toxic   ultrafine   particles,   which   are   preventable. Nevertheless note that this modern technology also has disadvantages. The platinum coated  oxidation  catalytic  converters,  in  PM·Cat,  can  substantially  increase  the undesirable  N02.  And  the  SCR  technology  can  cause  ammoniac  slip  and  release other  toxins,  which  are  not  yet  sufficiently  Investigated.  These are  secondary emissions,  which  must  be  prevented (testing  mandatory in Swltzer1and  and  in USA) when introducing new technologies. Numerous  Investigations  In  past  decades  have  researched  methods  to curtail  the particle emissions from Diesel engines. The following methods were investigated:

Many methods can diminish the mass PM, comprising the solids and condensates. The ultrafine particles are at the most decreased  by one  order  of magnitude.  It  is Insufficient compared to good particle filters that can diminish ultrafine particles by 3 to 5 orders of magnitude. The  efficiency  of  this  fitter  is higher  for  smaller  particle  sizes.  That  Is  a  desirable feature  in  view  of their  toxicity.  This  effect  is  physically  plausible  because  of the diffusion behavior of ultrafine particles. The particle content of the exhaust-gas is thus diminished  below the  particle content of the environment.  Besides the soot  particles, all heavy metal particles from abrasion and lube oil are  intercepted, too. Also filtered are  mineral  particles  and  fiber  fragments,  e.g.  from  the  mufflers.  This  outstanding attribute  of modem particle  fitters  Is  sustained  over tong  time  periods.  There are no Indications  of deterioration  due to  aging.  All  particle  filters  not  only curtail  the  solid particles. They also curtail the concentration of the polycyclic aromatic hydrocarbons, which  adhere  to  the  particles.  Many fitters,  when  catalytic coated,  also diminish  CO and HC. Some particle fitters Increase the  N02  content of the exhaust-gas.  Selecting the appropriate finer regeneration technology can prevent the undesirable N02 effect.

Figure 4 shows the specific Installation costs in CHF pro kW, It is based on present market prices, mainly influenced by deployment on construction site machines.

High costs persist. The slope of the curve Indicates the unfavorable circumstances for smaller  machines,  which  suffer  very  high  specific  costs.  If  the  cost  Impact  were formulated as cost/kg soot disposed, then the curve would  be almost horizontal.  The data for filler fitted ex-factory, both trucks and car manufacturing, shows the possible economies.  The  retrofitting  costs  should  not  be  underestimated.  Usually, much customized  retrofitting  is  necessary, which  is expensive.  Further cost reductions will result,  when  larger  unit volumes  rationalize  retrofit  kits  that  lower  fitting expenses. Nevertheless,  the  heterogeneity  of  construction  machines  would  keep  costs  high. More promising are lower costs for utility vehicles. These benefit from more uniformly in vehicle types, deployment range and the placement situation. Thes
e high costs  are  macro-economically  justified  when  there  are  comparable financial benefits In saving medical expenditure. The following table Intend to quantify the cost I benefit ratio,  for various deployment situations, I.e. the cost to prevent  1 kg of emitted soot comparing the use of high efficiency wall  now  filters for HCV to partial flow filters for LDV as well as for off-road/construction machines. 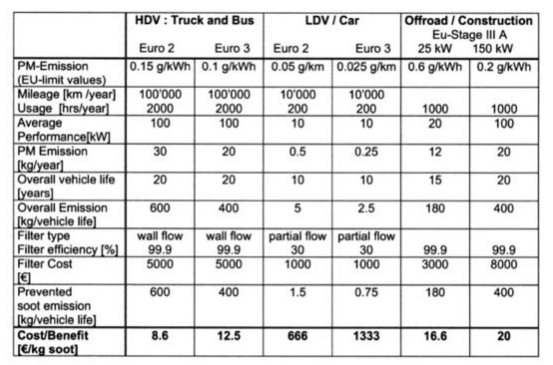 Clearly. the  Cost/Benefit  for  retrofitting  high  efficiency  wall  now  fitters  at  HDV  at apparently high costs is much more cost efficient than the use of partial flow filters  as they are proposed for retrofitting LDV and the Cost/Benefit for off-road and construction equipment where filter retrofit cost is again higher Is very affordable for large and for small engines ~use of the high emissions from these small engines. Moreover, the deployment of partial flow (open) filters on cars has a very poor cost/benefit ratio, i.e. such products should be definitely avoided. A useful benchmark, for evaluating these cost/benefit ratios, Is the WHO value for the so-called external health costs proposing  280 E per kg soot.