Iran’s big cities air pollution is one of the major challenges to authorities in view of public health. Tehran City, with about 10 Million resident, has been facing more and more air quality problems over the last decades. The criteria pollutants in Tehran are PM2.5, PM10. Particulates and especially ultrafine particles have been identified as the most toxic component of the polluting mixture. Considering diesel engine operation concepts, these types of engines are one of the main source emission of ultrafine particles in urban areas. So controlling particulates emitted from these sources, is one of the first steps to improve air quality. Diesel Particulate Filters (DPFs) are well-known and effective way to reduce particles number and mass. Lately, the Iranian government decided to legislate DPF installation for High Duty diesel Vehicles (HDV). Both, national and international engine industries and experts are now challenged to comply according to the new upcoming standards.

ASA is the first private company have been participated at the first DPF project of Iran. In January 2014, the City Council of Tehran decided to order the retrofit of the public bus fleet of the capital. So DPFs’ feasibility study project is organized by Tehran Air Quality Control Company (AQCC). The project consists of two phases. Phase one is particle filter tests on the engine lab was provided in Tabriz for approval of DPFs in Iran. During this phase different types of DPFs from various companies were tested according to VTF1[1] test procedure, by FCE[2] under supervision of VERT association.

After analyzing phase one results, approved DPFs were sent to Tehran, for fieldwork tests. 18 BRT[3] from different lines with various working paths, were selected and equipped with data logger by ASA[4]. Selected buses operational function were evaluated and analyzed for DPF installation feasibility. By the time ASA installed 8 DPFs on these samples and their data have been collected and analyzed from installation date. ASA Data Analyzer Software (ADAS) have been created and used for this purpose. Analyzed data were published as monthly reports, and were sent to the other beneficiary companies like AQCC, VERT and foreign DPF producer companies. Besides having project related experts, good connection with DPF producer companies make ASA unique at DPF related projects. 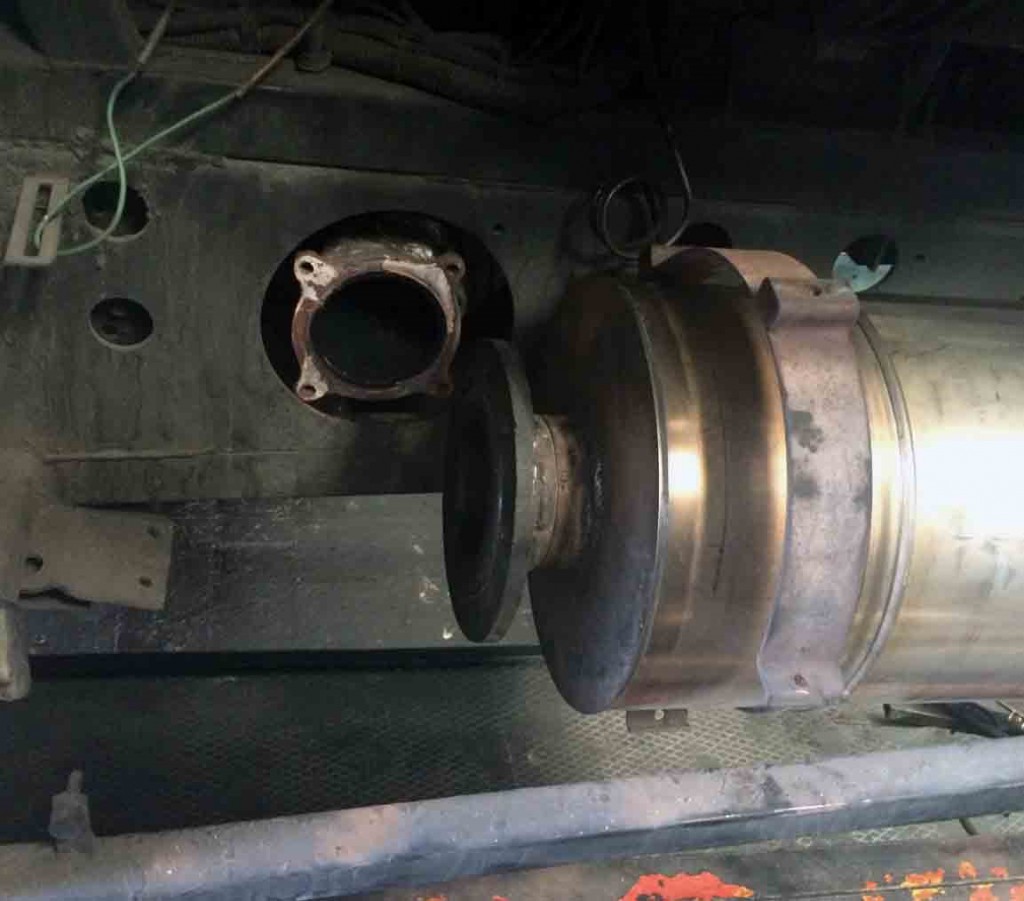 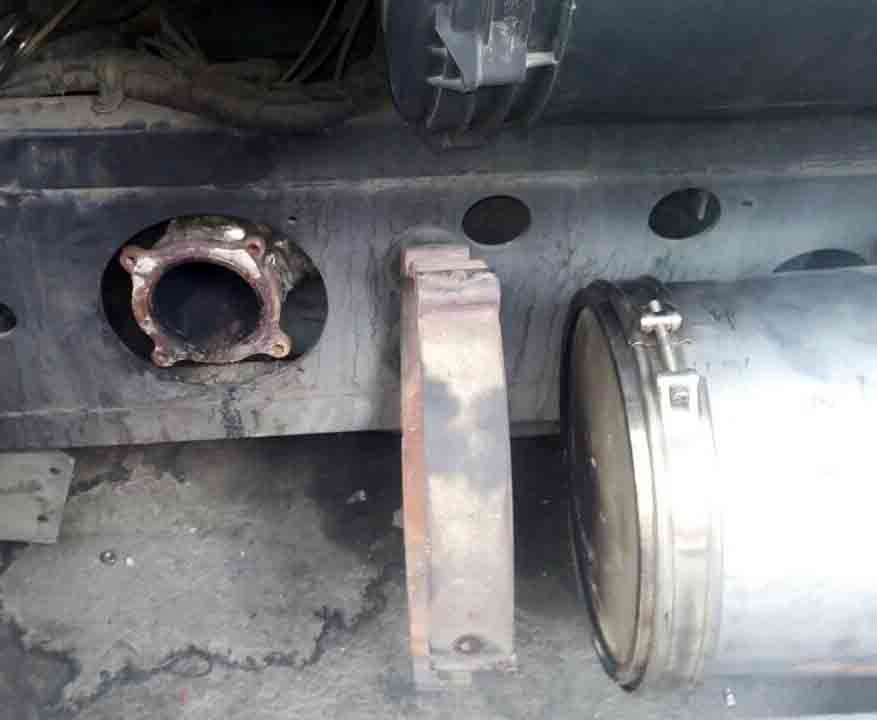 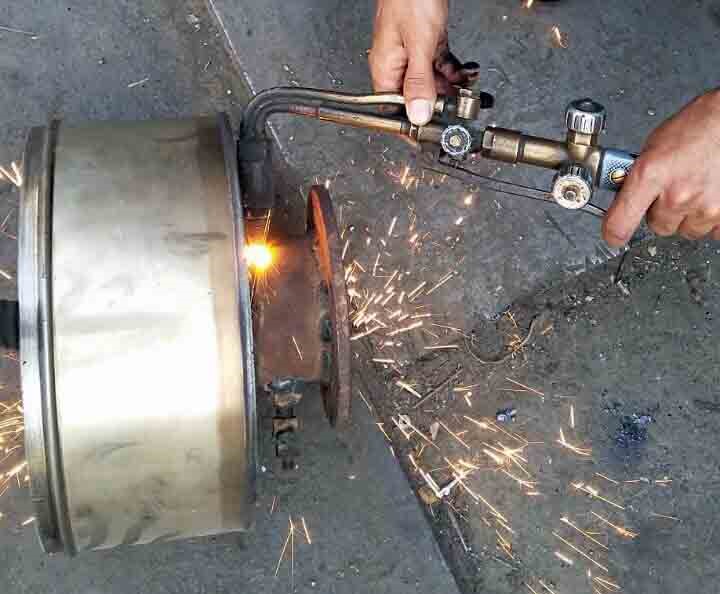 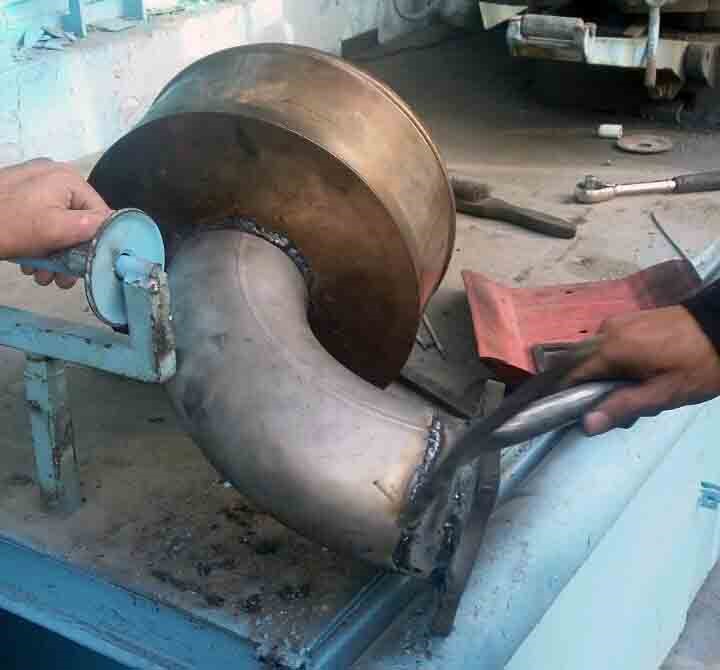 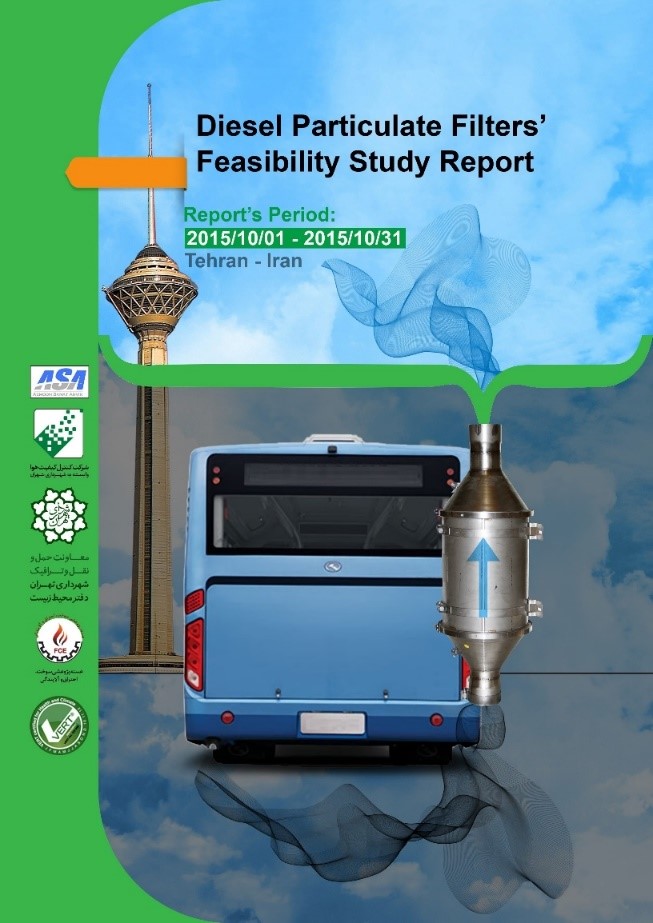 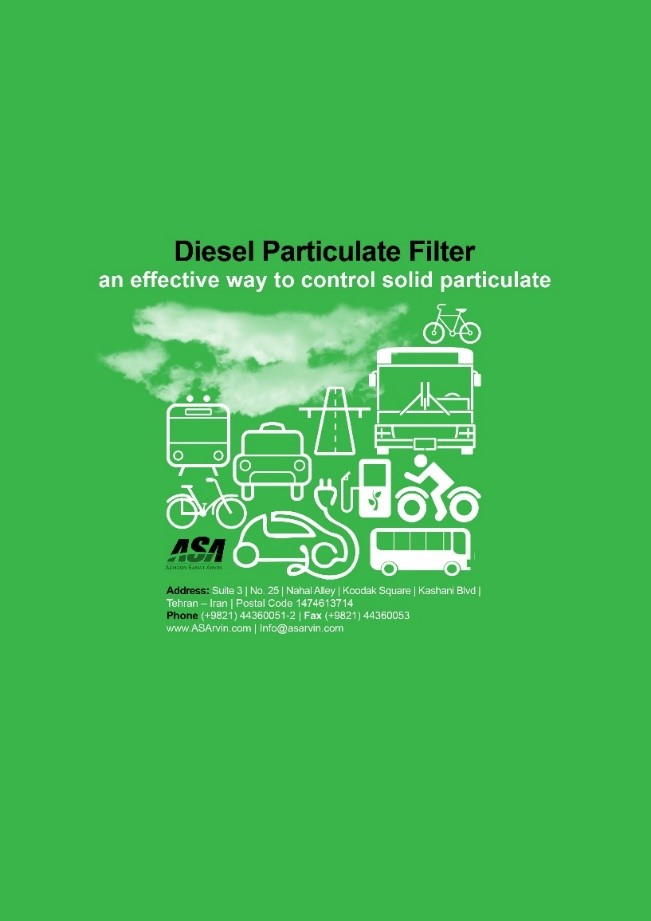 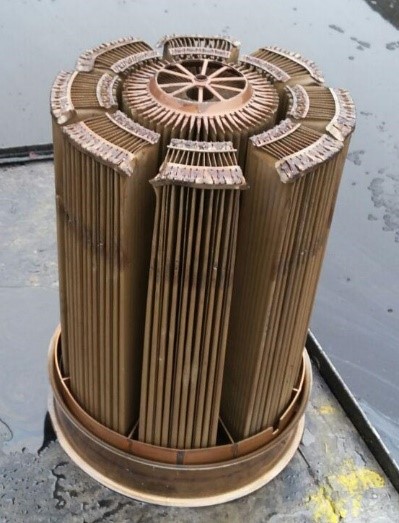 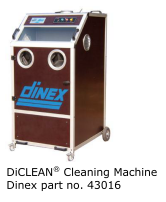 Soot particle emitted from a diesel engine can be efficiently removed from the exhaust gases. The heterogeneous combustion processes in Diesel engines deliver the highest concentrations. Despite intense engineering efforts, the emissions of the numbers of nanoparticles from new diesel engines are not diminished. In recent years various types and configuration has developed so now DPF is well-known for reduction of both mass and numbers of particles and known as a best available technology (BAT) for solving airborne particulates issue. 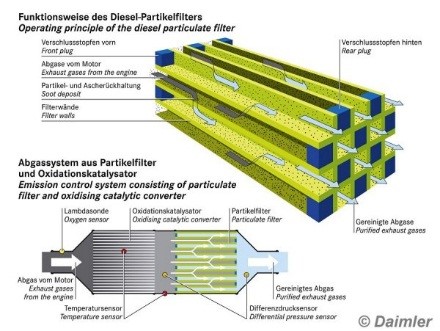 What is DPF TECHNOLOGY? 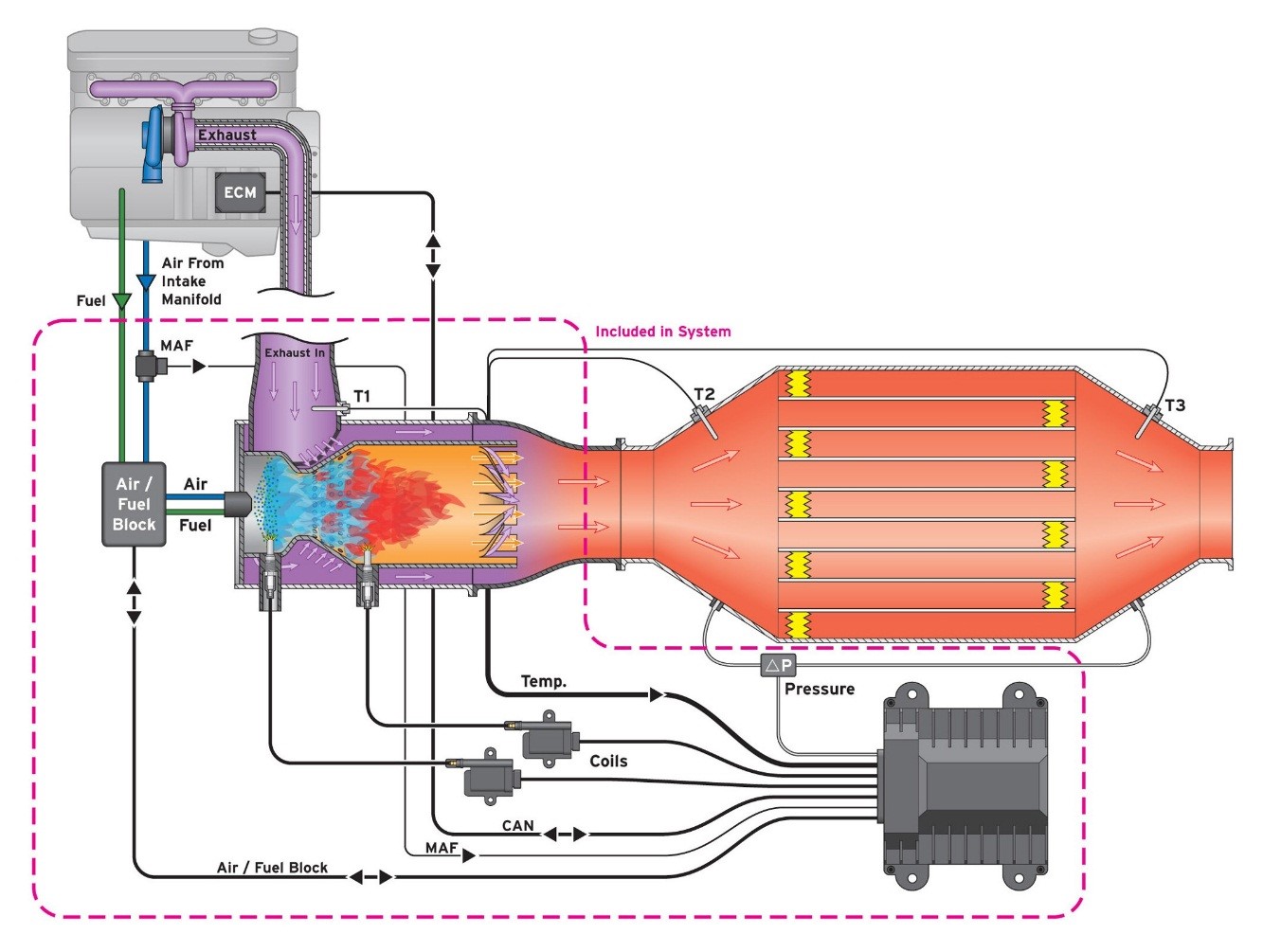 As the name implies, diesel particulate filters remove particulate matter in diesel exhaust by filtering exhaust from the engine. They can be installed on vehicles or stationary diesel engines. Since a filter can fill up over time, engineers that design filter systems must provide a means of burning off or removing accumulated particulate matter. A convenient means of disposing of accumulated particulate matter is to burn or oxidize it on the filter when exhaust temperatures are adequate. By burning off trapped material, the filter is cleaned or "regenerated". Filters that regenerate in this fashion cannot be used in all situations.

Filter Material: A number of filter materials have been used in diesel particulate filters including: ceramic and silicon carbide materials, fiber wound cartridges, knitted silica fiber coils, ceramic foam, wire mesh, sintered metal structures, and temperature resistant paper in the case of disposable filters. Collection efficiencies of these filters range from 50 to over 90 percent. Filter materials capture particulate matter by interception, impaction and diffusion. Filter efficiency has rarely been a problem with the filter materials listed above, but work has continued to: 1) optimize filter efficiency and minimize back pressure, 2) improve the radial flow of oxidation in the filter during regeneration, and 3) improve the mechanical strength of filter designs. 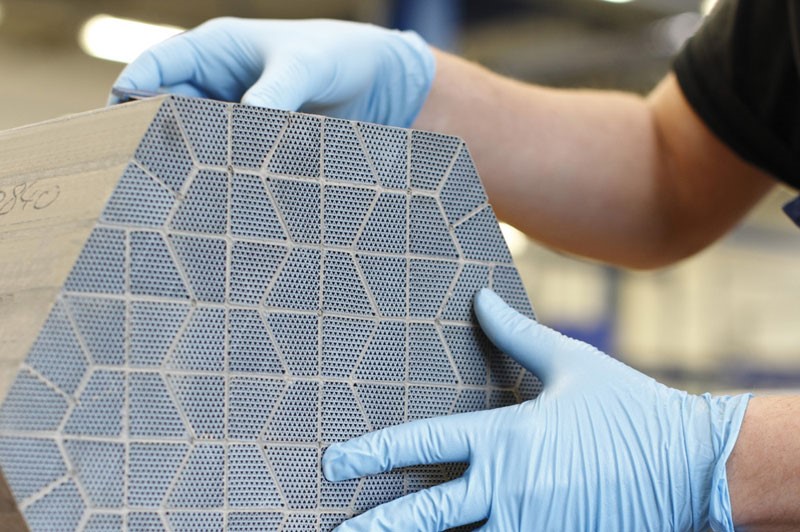 Diesel particulate filter (DPF) systems are designed by combining different filter materials with selected regeneration methods. A classification of diesel filter systems based on the principle of regeneration is shown in below chart. A diesel filter system must provide reliable means of regeneration, preferably a fully automatic regeneration occurring without an intervention (or even knowledge) of the vehicle operator. An alternative would be to use disposable filters—a solution that has been accepted only in certain very specialized niche market applications. 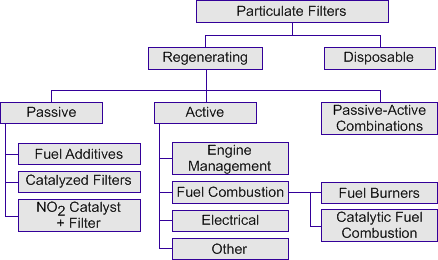 The majority of regenerating diesel filter systems utilize thermal regeneration, during which the particulates are oxidized to produce gaseous products. The temperature of the diesel exhaust gas is, however, too low to sustain auto-regeneration of the filter. That problem may be solved by either (1) decreasing the required soot oxidation temperature to a level which is reached during regular engine operation or (2) increasing the temperature in the filter to the point where the trapped soot starts oxidizing. The first approach is used in passive filter systems, the second in active filter systems.

This is based on chemical reactions that take place in the engine’s exhaust aftertreatment system. First of all, nitrogen dioxide (NO2) is produced in the oxidation catalyst from the nitrogen monoxide (NO) in the exhaust gas. In the diesel particulate filter, the process is reversed and the soot deposited in the diesel particulate filter is continuously burned off. Hence the name “Continuous Regeneration Trap” (CRT), i.e. a continuously regenerating filter. This effect is also referred to as passive regeneration. In contrast to active regeneration, the reaction requires no additional energy. 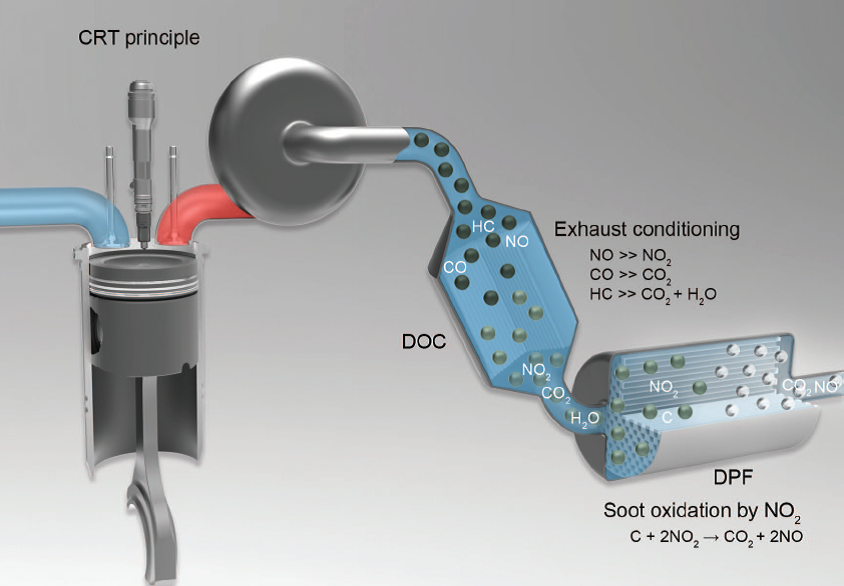 In passive systems the soot oxidation temperature is lowered to a level allowing for auto-regeneration during regular vehicle operation—a task commonly achieved by introducing an oxidation catalyst to the system. The catalyst can promote oxidation of carbon through two mechanisms:

Through different placement of the catalyst and different system configuration one can utilize either one of these mechanisms or their combination. Three major approaches have been used: (a) adding a catalyst precursor to the fuel as an additive, (b) placing the catalyst directly on the filter media surface, or (c) using an NO2 generating catalyst upstream of the filter.

The second approach is to actively trigger regeneration by raising the temperature of soot trapped in the filter through the use of an outside energy source.

If an engine runs under very low load, the exhaust gas temperature can drop to a point where continuous regeneration can no longer be completely guaranteed. In order to prevent the diesel particulate filter being overloaded when operating under such conditions for a long time, additional thermal energy must be introduced for a short time into the exhaust gas. That can be done, for instance, by injecting fuel into the combustion chamber in one or more post injection sequences or injecting fuel directly into the exhaust system. This fuel is then completely burned in the engine’s oxidation catalytic converter. In this process, it releases enough heat to raise the exhaust temperature in the particulate filter to over 550 degrees Celsius. The use of a burner is also possible. As a result, the deposited diesel soot oxidizes with the surplus oxygen present in the exhaust gas. Active regeneration of the particulate filter is used primarily in cars and commercial vehicles with high specific soot emission levels. 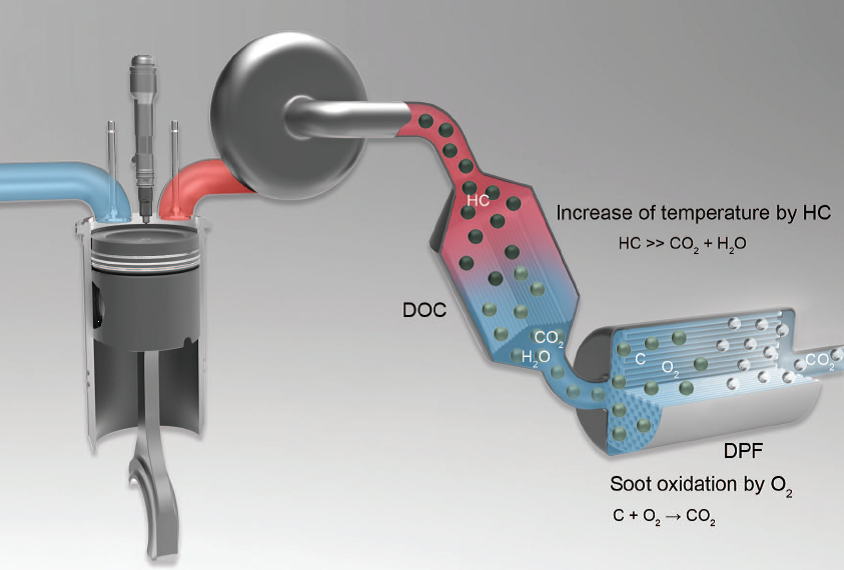 There are two obvious energy sources that are available on-vehicle: diesel fuel and electricity. The energy from fuel combustion can be used to increase exhaust gas temperature by either (1) in-cylinder engine management methods, such as late cycle injection of additional fuel quantities, or (2) injection and combustion of fuel in the exhaust gas. If exhaust gas combustion is used, fuel can be burned in a fuel burner or else oxidized over an oxidation catalyst, in a catalytic combustion process.

Electric heating can be used in a number of configurations, such as—for example—placing an electric heater upstream of the filter substrate, incorporating heaters into the filter media, or using electrically conductive media (such as metal fleece) which can act as both the filter and the heater. A stream of heated air can be also utilized to trigger regeneration, rather than heated exhaust gas.

Passive-active combinations, depending on the type and loading of the catalyst, may be able to sustain fully passive operation during periods of increased exhaust temperature. For instance, a catalyzed filter in a passenger car may regenerate passively during fast highway driving, but will depend on active regeneration—which could be triggered by an engine management strategy—during low speed city driving.

Another types for classification of DPFs:

In the case of a wall-flow diesel particulate filter, the entire exhaust flow is passed through the fine porous ceramic walls of the filter element. This makes very high particle filtration rates of over 90 percent possible. However, filter regeneration must be possible in a wide range of engine applications, to prevent clogging. The resulting high exhaust backpressure would lead to higher fuel consumption and, in the worst case, to filter and engine damage. Consequently, including the engine’s thermal management measures is of particular importance in the development of the system. Wall-flow particulate filter systems can be combined both with passive and active regeneration. 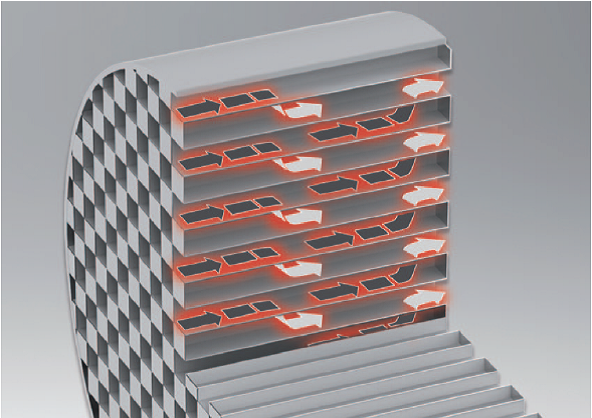 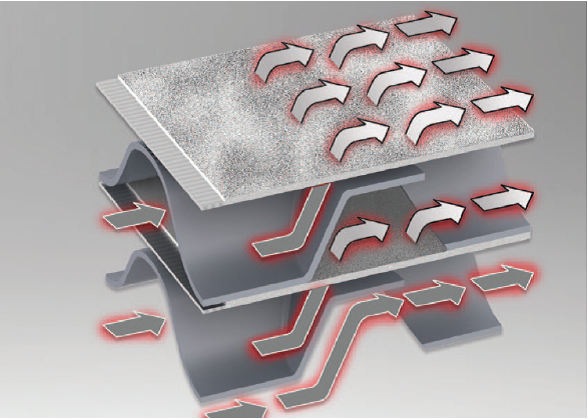 A DPF needs to grant two major functions: The first is to filter as many particulates as possible out of the exhaust gas. The second is to support different regeneration strategies of a DPF system, in order to remove the soot from the filter. Filtration and regeneration are therefore the most crucial elements of a particulate filter. The filter needs to stand high temperatures, especially when high soot loads are combined with active regeneration. Diesel particulates evolving from engine combustion are carcinogenic to humans. Being just some nanometers big, they could be inhaled easily. The target of a high tech filter material is to filter even the smallest particles, without increasing the back pressure significantly. Our experience from different applications all over the world shows that Silicon Carbide (SiC) material masters all these requirements on a high professional level. 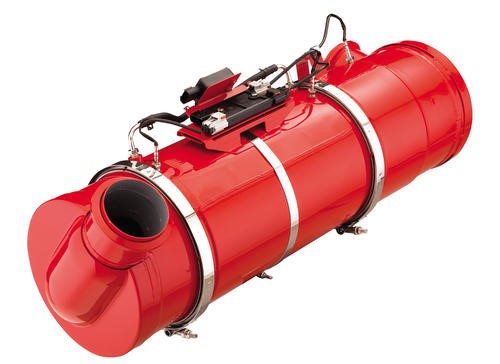 Diesel particulates are dangerous to the health of humans. Therefore PM emissions are an important value for engines in new vehicles and for the emissions of older vehicles as well. In order to protect people, retrofit programs were launched targeting the upgrade of older engines to latest emission technology.

Switzerland has been the hotbed of all PM emission reduction movement. Already in the 80s they draw a line between PM emissions and respiratory diseases of workers. The Swiss compensation insurance (SUVA) mandated a study finding the relation between costs of retrofit and medical expenses for recreation and integration of sick people. The result was striking and since then, especially construction equipment has to have a DPF system fitted. Consequently Switzerland was the first country making up their mind about a DPF standard. The target was to establish a technical procedure of testing a DPF retrofit system if it complies with the demands of the industry and the health aspects.

Today the VERT standard (verified emission reduction technologies) is one of the hardest and well respected international standards. Many national rules have their roots in the approval procedure of VERT.